The importance of sculpture


Consider for a moment what we would know of ancient cultures without art. From the cave paintings of the Cro-Magnons to the Pieta of Michelangelo to the great work of our modern masters, art has been one way we humans have expressed ourselves through the ages. Before the written word, art was the only way our ancestors were able to convey their religious beliefs, their views on the world around them and the things that they felt were most important.

We make immediate associations to a long gone culture through their artworks left behind. For instance, when we think of ancient Egypt, we think of the Pyramids and the Sphinx among other things. Their art helped define who they were long ages after the last of the Pharaohs had perished. 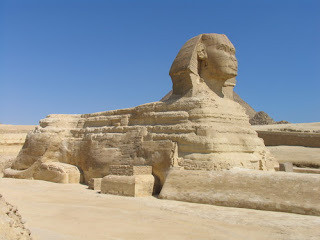 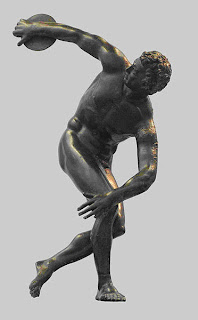 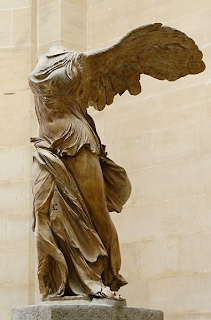 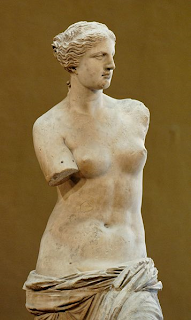 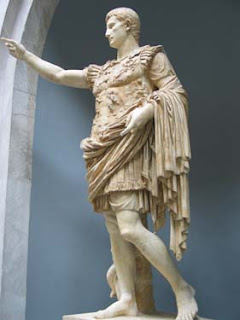 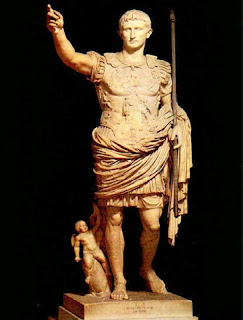 Art tells so much about the people or societies, as it were, responsible for it. Take a look at the Moai statues of Easter Island, the temple decorations of the Mayans, the terra-cotta army of China’s first Emperor, the Renaissance statues of Italy, and the Lions outside of the New York Public Library. 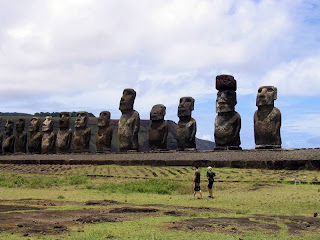 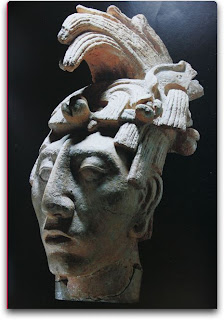 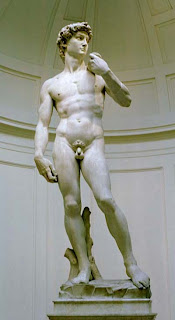 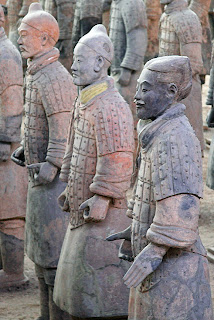 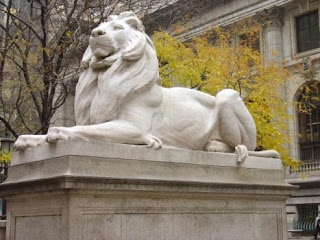 With the exception of the last sculpture pictured, what would we really know about these ancient cultures without art? What were they trying to convey for their descendants by creating sculpture in stone and metal?  What are we trying to convey with the guardian lion?

Painting vs Sculpture: What will endure?

The cave of Lascaux in France preserved the Cro-Magnon cave paintings there, made over 30,000 years ago, because they were not open to air. Once the cave was opened and the paintings exposed to air and moisture, they started to deteriorate. In fact, you can not visit the original cave anymore. A new one with replicated paintings was created for tourists.

A painting left to the ravages of the elements may not last a decade without constant care, while a statue in bronze or stone can last thousands of years. It is obvious that those who made these works of art and those that commissioned their making, wanted them to last for ages as a testament to who they were. It was their way of saying us, “Remember me”.

Don’t get me wrong, I’m a huge fan of painted works. I find them rich and inspiring. With proper care, they can last for centuries or longer. So, why then do we make monuments in stone and metal?  First, the simple answer...they endure the elements without the need for constant upkeep.

Now, the not so simple answer...

Sculpture endures throughout the ages, because it does what paintings can not. It can be viewed from many different angles and in varied lighting which gives more or less emotive power to the piece. A painting, on the other hand, is what it is. Lighting may allow you to see the picture better or not, but it doesn’t change its emotive quality.


Light and shadow to a sculpture can bring a piece of stone or metal to life. Anyone who has ever been to “The Haunted Mansion” at Disneyland, has seen the effect of light and shadow as they have passed the watchful busts that seem to turn their head and follow you.

Auguste Rodin clearly understood this and used light and shadow on his sculptures to help bring out the life within them. Just take a look at the forlorn looks on the faces of his "Burghers of Calais".  Light and shadow are used so effectively throughout the piece to bring out the emotions of each of the Burghers as they face their deaths to save their city. 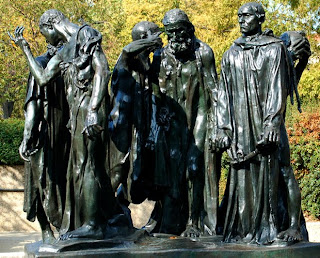 I say sculpture lives, because of the way it interacts with nature and the environment where it is placed. The play of sunlight throughout the day and the onset of twilight until finally the shadows of darkness fall upon it, create different emotive looks for the sculpture, causing it to be perceived differently by the viewer.   Too much light and the piece is washed out, too little light (or too heavy shadow) and the piece can become washed out as well.  However, in such cases, one may need to only change their viewing angle to gain new perspective on the piece.  It can be an emotional and moving experience for the viewer or nothing at all.  Much depends on the eye of the beholder and their state of mind when viewing the piece.

Sculpture also lives because we can interact with it, like we interact with the solid objects of the world around us…trees, rocks, waterfalls, buildings, or our friends and family. Take for instance this wonderful sculpture of Ben Franklin located in Smithfield, VA. 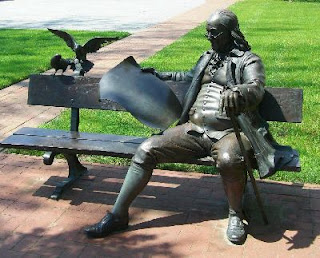 And like the world around us, sculpture helps enhance, or at the very least, add interest to an area.

How will we be remembered?

Today, we still create monuments and statues of those things we find important. When our buildings have crumbled and our electronic records are lost to the ravages of time, what will we have left behind of who we were? Will a civilization thousands of years from now, be able to tell who we were by those things that have endured? How about two or three decades from now in our own families? Are we complacent to see the memory of those dear to us fade away, as surely as photos in an album or do we seek to immortalize them in a more lasting art form?

Some may say it is morbid to have portraits of those dear to us, or dear to our grandparents in our homes. While others are happy to have what they describe as the comforting presence of their ancestors close to them. Whatever one’s personal view of portrait busts are, perhaps it should be pointed out that sculpture can be used not only to memorialize those dear to us, but to capture a moment in time forever. Maybe its that loving look shared between a couple, a mother with her baby, the sweetness of a child at play, or a triumphant moment for an athlete. Moments like these can be relived for decades to come and can stand on their own as emotive works for your own family or others for long years to come.

Art also helps define who we are or what we find beautiful.  It can be used to enhance an otherwise uninteresting niche in our home or be a constant source of encouragement or comfort to us.  Our ancestors knew this and used sculpture much in the same ways I've already described above.  They just did it in the style of their particular culture.  We may remember them in an instant for their greater works, but every year a person discovers an ancient artwork that they are surprised to find is so relevant to their life.

We know how our distant ancestors left their mark on history and how they wanted to be remembered.

How will we choose to be remembered?
Posted by Will Pettee at 12:29 AM 1 comment: